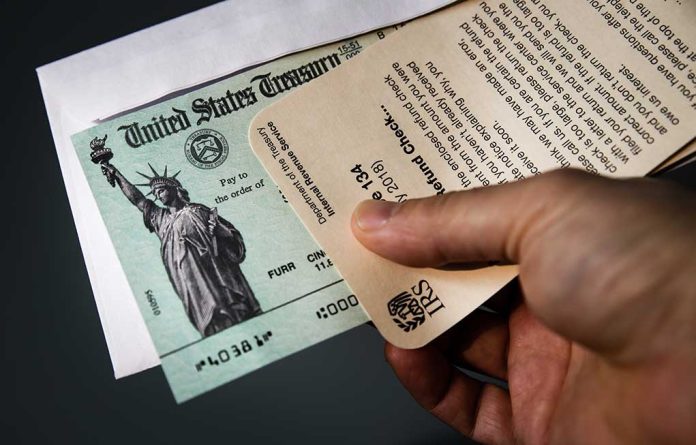 (ConservativeInsider.org) – This February, gas prices averaged over $4 a gallon for the first time since 2008. While some analysts blame the sky-high cost to fill up a tank on Russian President Vladimir Putin’s illegal invasion of Ukraine, that’s not the whole story. Inflation has hit Americans hard across the board as too much money is chasing too few goods. Now, President Joe Biden’s Congress is hoping to give out a new type of stimulus check to help Americans make ends meet because of these high gas prices.

On Thursday, March 17, Representatives Mike Thompson (D-CA), John Larson (D-CT), and Lauren Underwood (D-IL) introduced the Gas Rebate Act of 2022 into Congress. If passed as currently written, the bill would provide a $100 rebate to recipients for the rest of 2022 and any future month where gas is over $4 a gallon on average. It would also provide an extra $100 for each dependent.

The rebate would phase out on a tier system, with single tax filers receiving it if they earn under $75,000 and joint filers if they earn less than $150,000. In a press release, Representative Thompson called the high prices at the pump the “Putin Price Hike,” and refused to acknowledge how pumping government stimulus checks into the economy could have contributed to this inflation.

In case lawmakers don’t like the first proposal, Representative Ro Khanna (D-CA) has introduced the Big Oil Windfall Profits Tax Act, which would tax the enormous profit gas companies made in the past two years and, in turn, provide tax filers with a rebate.

In a similar proposal, Representative Peter DeFazio (D-OR) introduced the Stop Gas Price Gouging Tax and Rebate Act that would make oil companies pay a 50% tax on their adjusted 2022 taxable income if it was over 110% of their income between 2015-2019. The government would then send this money to taxpayers in a similar monthly tax credit.

However, every single one of these Democrat-led proposals simply injects more government debt into the economy, further crippling it and encouraging inflation.

With citizens becoming increasingly less concerned with COVID-19, they’re beginning to travel more and spend money they haven’t had the chance to over the past two years. This, along with enormous tax credits and stimulus payments from the government, has driven up prices of just about everything — including gas.

If Congress truly wants to help the economy recover, it should not be callously lowering costs, but encourage Americans to be less dependent on government handouts.