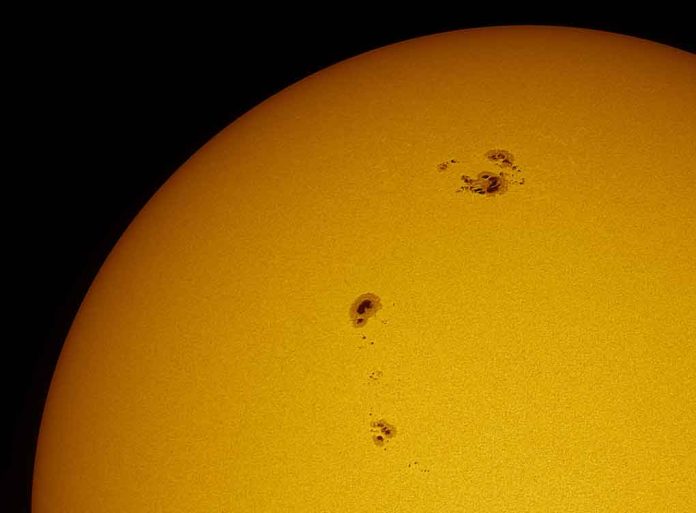 WARNING – These Giant Sunspots Are Changing The Sun’s Vibrations

(ConservativeInsider.org) – Scientists have tracked the sun and its surface for centuries as they try and understand more about the star our world quite literally revolves around. A recent sunspot, which is a colder area of the sun that has a strong magnetic field, has been growing, making scientists wonder if it’s preparing to set off solar flares. They have already detected multiple geomagnetic storms taking place from similar spots.

The sunspot known as AR3089 has been calm recently, causing astronomers to predict it could be getting ready to set off X-class solar flares. This category of flare is the most intense and is known for damaging satellites and causing communications disruptions. Right now, AR3089 is facing toward Earth, giving it the opportunity to cause major damage should it erupt. However, NOAA’s Space Weather Prediction Center thinks Earth-dwellers are mostly safe as it estimates the chance of an X-flare around 5%.

Another sunspot, named AR3088, is changing the way the sun vibrates because it is so large. It has sent a solar storm careening towards Venus for the second time this week. Thankfully, that’s in the opposite direction of the Earth right now, leaving us in the clear. However, experts estimate it will turn to face us in the next few days.

So, in the days or weeks to come, watch for alerts about this emerging sunspot. It’s possible that as you go about your day, you may notice your GPS, cell phone or radio, go on the fritz, or even stop working. It may be due to a solar flare. On a positive note, however, these incredible scientific phenomenons also give us natural wonders like the aurora borealis, more commonly called the northern lights.