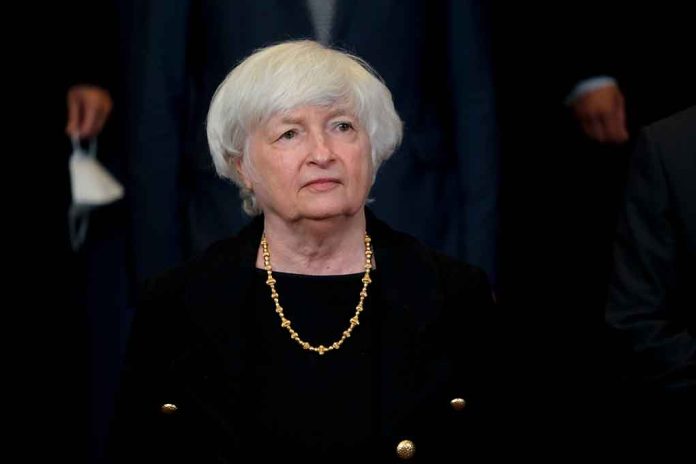 Janet Yellen Apologizes? And This HELPS – How?

(ConservativeInsider.org) – Americans have struggled with the rising prices of food, gasoline, and everyday necessities for months. At one point, the federal government said the inflation was just “transitory,” but now, it is clear it is not just a quick difficulty — it’s an extended burden on the economy. Even Treasury Secretary Janet Yellen admitted that the ongoing inflation is a major economic issue she did not expect.

On Tuesday, May 31, Yellen appeared on CNN’s “The Situation Room” with Wolf Blitzer to discuss inflation and her previous comments on the economy. During the interview, Yellen admitted she “was wrong” about inflation when she previously said it was merely a “small risk” to the United States. She highlighted there were “unanticipated and large shocks to the economy” that the government “didn’t fully understand.”

For MONTHS the Biden Administration told the lie that #Bidenflation was “transitory.”

Biden’s agenda is to blame.pic.twitter.com/3isFlNp9y0

While the Fed is trying to help get record-high inflation under control by raising interest rates, the government and its officials have yet to admit any of their policies or stimulus packages could have contributed to the issues citizens now face.

While Americans deal with these high prices, it is important to note that unemployment rates are incredibly low and, in some areas, a significant rise in wages is being enjoyed. Will this be enough to keep a recession at bay or instead, lead to higher inflation?