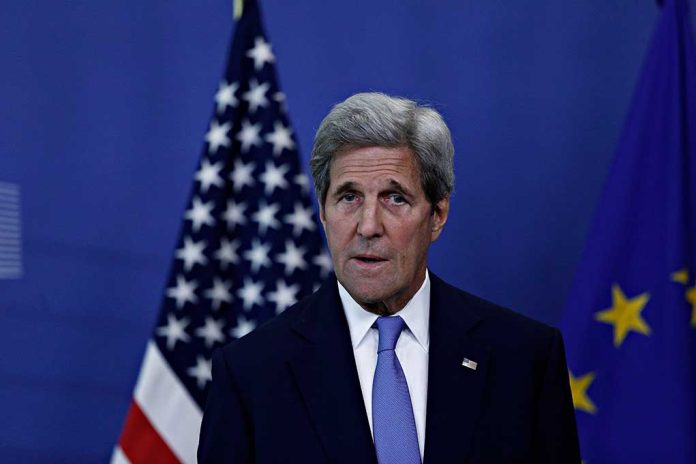 (ConservativeInsider.org) – Russian President Vladimir Putin ordered his troops to invade Ukraine this week. As the military made its way through the country, the world tried to figure out how to stop the bloodshed. NATO allies and the US issued a series of sanctions meant to cripple the Russian economy and persuade Moscow to stop advancing. Thousands of Ukrainians fled their homes, fearing they might be killed.

Meanwhile, over in the United States, a prominent official in President Joe Biden’s administration wasn’t expressing concern about people, but instead about the climate.

On Wednesday, February 23, Former Secretary of State John Kerry granted an interview to BBC Arabic. During a conversation about a potential conflict, which took place before the bombing began, Biden’s climate czar expressed concern about the possibility of “massive emissions” resulting from the conflict.

Kerry said he was concerned about the people of Ukraine, not because they could die or lose everything in a war, but it might result in a “profound negative impact on the climate.” He went on to say emissions are a product of war. Further, it’s going to cause people to lose focus and the attention of other countries will be diverted from the issue of climate change.

Again … because there will be people fighting to stay alive, the ensuing smoke will enter the atmosphere from the ruins of their smoldering homes – Kerry is concerned that won’t be on peoples’ radar.

Kerry told BBC he hopes Putin will remember that his country is being impacted by climate change as well because what used to be the Russian tundra is thawing and putting infrastructure at risk. He said he hopes Putin will “help [the US] stay on track with respect to what we need to do for the climate.”

Kerry’s interview didn’t go over well with the sane people of the world. British Member of Parliament Marcus Fysh shared a clip of Kerry speaking on Twitter — giving his blunt opinion on the matter.

These idiots are the problem https://t.co/ItEeUWFYwS

People are getting killed and the Biden administration’s climate envoy — who regularly flies to climate events in a private jet — is concerned first about the impact on the climate fight.

In the days since the bombing began, Kerry has not walked back his statement or apologized for being so callous. President Joe Biden’s administration has all but pretended their climate czar didn’t make a fool of himself on foreign media. And strangely enough, nobody in eastern Europe seems concerned about how a deadly war might impact the clouds.