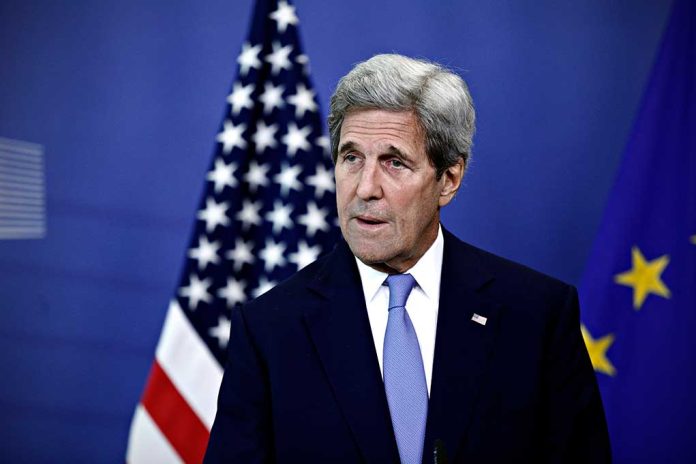 (ConservativeInsider.org) – There’s no denying that Russian President Vladimir Putin’s invasion of Ukraine has forced the world to debate sanctions, military aid, wheat supplies, and energy sources. With this, countries are struggling to strike a balance between supplying their citizens with necessary goods while sanctioning the main provider of that commodity. When it comes to energy sources, though, Special Presidential Envoy for Climate John Kerry hopes Russia’s aggressive acts will make people move to green energy quicker.

On Wednesday, April 13, Kerry spoke at the Our Ocean Conference in Koror, Palau, a small island nation in the western Pacific, just east of the Philippines. To begin his speech, the special envoy brought attention to the war in Ukraine, declaring that the conference’s mission is “even more urgent” because of the events unfolding.

Kerry explained he believes the switch to clean energy would help take away power from Putin, as the dictator “cannot control the power of the wind or the sun.” In theory, if nations had absolutely no need for gas and oil, that plan would work. However, the switch to Kerry’s green energy, using solar panels, wind farms, and hydroelectric dams, is incredibly expensive and quite a lengthy process. In short, it’s not practical.

What Is Kerry’s Proposed Plan?

If John Kerry had his way, he would “dramatically scale up on- and off-shore renewable energy,” such as wind farms. While minimizing Putin’s power leverage on the world is a good idea, it is not feasible solely through a Green New Deal. Besides, there are plenty of respectable providers of gas and energy that aren’t barbarically attacking another nation.

Kerry also wants to limit plastic pollution and production and cut down on illegal fishing to preserve the ocean. All in all, though, Kerry’s remarks seemed to fall flat as he tried to exploit the war in Ukraine for his own green energy goals.

Who Is to Blame for Energy Needs?

Aside from using a major humanitarian crisis to further his own agenda, Kerry also ignored the fact that domestic energy production could be increased to help alleviate much of the burden the world feels trying to avoid Russian oil. That would also slow Putin’s energy leverage.

Though, if Kerry acknowledged the other ways to be free of Russian oil dependency, he would also have to acknowledge that he is, in fact, one of the major users of the fuel as he continues to galavant around the globe in his private jet.